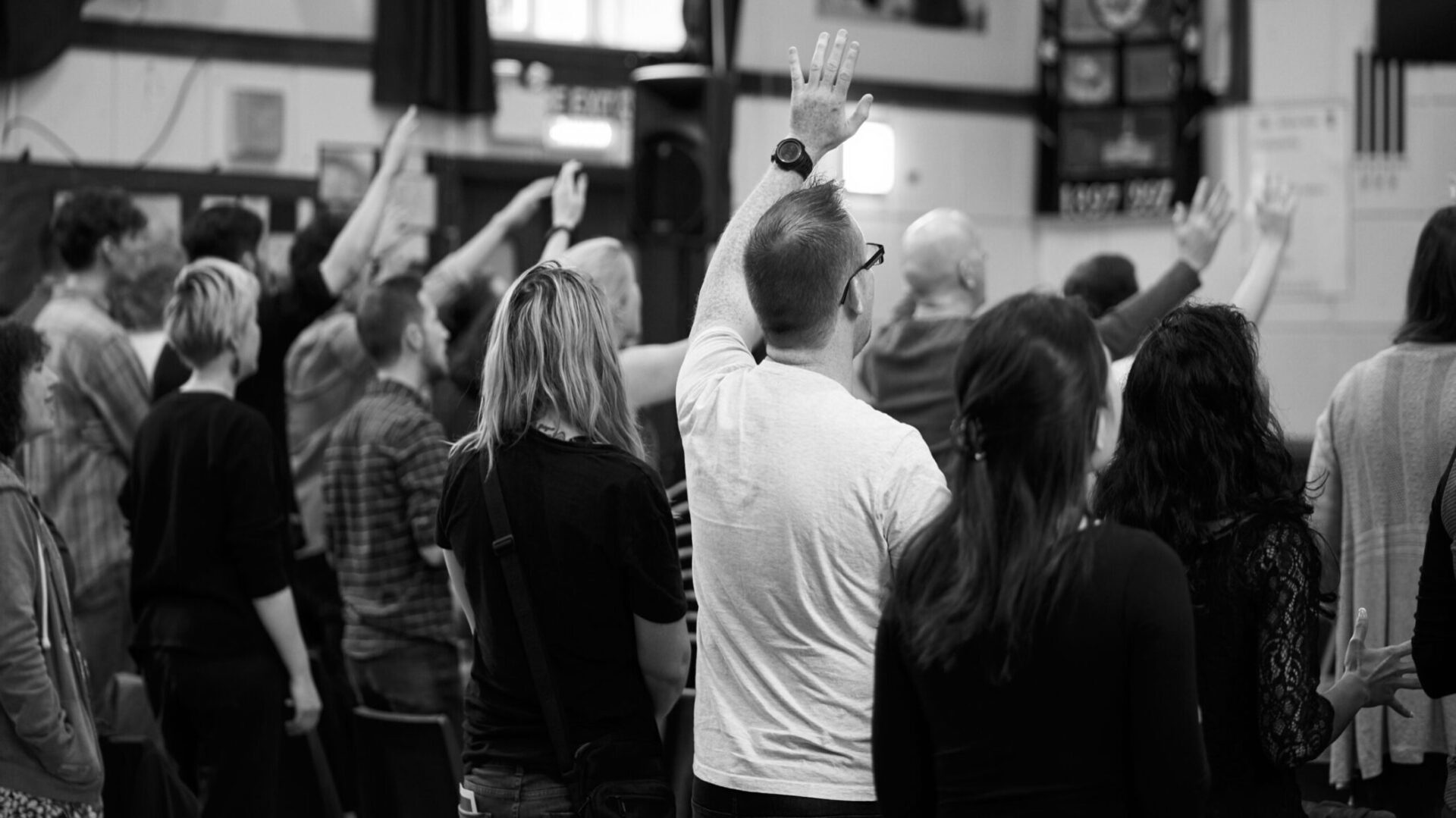 Good morning Vineyard family, we hope you are all safe and well.  We are praying for you daily and miss your fellowship.  I wanted to share a bit about what the Lord has speaking to us about and hopefully it is encouraging to you at this present time.

Our present situation has forced us all to do life differently, I’m sure we have all had lots of time to reflect adjust and contemplate many things about our lives.  My heart is saddened every day I read about a new tragedy of the loss of a life.  It has been reflecting on this tragic loss that compels me to take stock of what truly matters in my own life and why I hope we don’t go back to our old normal.

I have a friend Andy who is so positive that at times it feels as if, he lives in a different reality to us mere mortals and yet what he says always comes from his heart and is genuine and sincere.  He attributes this positive outlook to his relationship with Jesus and a greater awareness of Heavens realities as opposed to earthly ones.  He always encourages me to think in terms of every cloud has a silver lining.  I know that might be hard to contemplate when the news is so full of sadness just now.

But as I look around me, where I live in my own neighbourhood I see change, I see people doing community (albeit at a distance over the fence) but they are looking out for one another, serving one another extending concern and empathy for one another that wasn’t there before.  I see parents getting to know their children again.  I see people’s values starting to change about how they think about life, work, about how they spend their time, their trajectory in life, their morals, ethics and lifestyle.  I see people awakening, asking is there a greater reality than the narrative of this selfish, driven, Godless culture we accepted as our only normal.

Recently someone said to me that before this crisis happened their life felt like a runaway train that they didn’t know how to stop or get off, and they were miserable.  They said “I was existing not living, I thought I was living the dream but my reality was  I was driven to achieve certain goals, living out the lie that, if only I could achieve them I would eventually have  satisfaction, happiness, contentment.”  The only problem was, that once I had achieved my goals it did not bring the hopes of satisfaction I longed for.  Just now I’m looking back at what I have had to sacrifice and I conclude that I’ve lost so much more than what I have gained, leaving me feeling that all that I have achieved is meaningless in the bigger picture of life.” It’s as if I have awakened from a horrible dream.

It is into that situation I have been able to share my hope in Jesus that does bring all the things he longs for, at a cost that has already been paid for him.  He is in good company as even the wisest man in the world found the same to be true you can read his conclusions  Ecclesiastes 2.

I also see people re-evaluating their lives and deciding to do something about it i.e. getting right with God and each other, seeking out a counter cultural normal before it’s too late!  My friend Jason writes that his  grandad at his grandmother’s funeral walked up to her coffin and in a voice breaking with emotion said, "I love you, nanny". His aunt, half-joking said, "silly sod waited until mum was dead to tell her he loved her!”  His Nan a few years before she died told him that she knew his grandad loved her. That it was ok that he had never said it to her, but she wished he had from time to time.  His grandad’s public declaration of love was sweet and tragic.  Some things are too late in the face of death.

We know the old adage that no-one on their deathbed says, "I wish I had spent more time at work". Death brings life, and what life is really about, into perspective and a right assessment. COVID-19 virus-related deaths are in numbers we cannot get our heads around, and they bring something closer to home. Something most of us are very good at doing - ignoring the fact that we are all going to die at some point.

The wisest people in history, have understood that one of the secrets to a good life, is to contemplate its ending. For only by considering the end of our lives can we truly decide what life we should be living?

As I write this there are testimonies coming into my inbox about people tuning into our online services that don’t know Jesus, either wanting to know more, committing their lives to Christ or rededicating themselves to him.  With tears in my eye’s, I hear Andy’s encouragement’s ringing in my ears as I read these messages of people coming home to their saviour one by one.

One of the many books I’m reading just now is RT Kendal’s book “Prepare Your Heart for the Midnight Cry” In it he talks about a move of God that sweeps over the face of the earth like none before. He describes it as a hundred times greater than anything yet experienced, indeed the greatest move of God since Pentecost.

He says that in comparison of what is about to come, that the Azusa street revival that gave birth to the Pentecostal/Charismatic movements is merely like Ishmael as opposed to Isaac.  Isaac was the promise not Ishmael, God still honoured Ishmael but through the lineage of Isaac his purposes on earth would be fulfilled.  His Prophetic analogy is in affect him saying that the promise of  the best is yet to come and is still a valid present-day reality.

But it is a time for the Church to be ready, to embrace both Word and Spirit, to live in holiness, righteousness and purity, being a people of His Word and His presence or we will be like the foolish virgins in Jesus parable in Matt 25.

Matthew 25:1 “At that time the kingdom of heaven will be like ten virgins who took their lamps and went out to meet the bridegroom. 2 Five of them were foolish and five were wise. 3 The foolish ones took their lamps but did not take any oil with them.4 The wise ones, however, took oil in jars along with their lamps. 5 The bridegroom was a long time in coming, and they all became drowsy and fell asleep.
6 “At midnight the cry rang out: ‘Here’s the bridegroom! Come out to meet him!’
7 “Then all the virgins woke up and trimmed their lamps. 8 The foolish ones said to the wise, ‘Give us some of your oil; our lamps are going out.’
9 “‘No,’ they replied, ‘there may not be enough for both us and you. Instead, go to those who sell oil and buy some for yourselves.’
10 “But while they were on their way to buy the oil, the bridegroom arrived. The virgins who were ready went in with him to the wedding banquet. And the door was shut.
11 “Later the others also came. ‘Lord, Lord,’ they said, ‘open the door for us!’
12 “But he replied, ‘Truly I tell you, I don’t know you.’
13 “Therefore keep watch, because you do not know the day or the hour.
Let me give you the short hand to understand this Parable of the Ten Virgins

The Bridegroom = Jesus
The Ten Virgins = Part of the church generally
Wise Virgins = Christians who pursue the Word and the Spirit
Foolish Virgins = Christians who do not pursue the word and Spirit
Lamp = Word
Oil = Spirit
Asleep = Spiritual condition of the church in the last days
Midnight = Middle of the night when the church is in deep sleep
Midnight Cry = wake up call to the church that Jesus is coming soon
Messenger (Implied) = Christians who cry out in the middle of the night
All Virgins waking up = The church waking up
Coming of the Bridegroom = The second coming (first spiritual, then physical)
Wedding Banquet = Celebration of the bride making herself ready
Shut door = When it is too late for repentance

As a follower of Jesus, I want to be like the wise Virgins, ready for what God is about to do or has started to do on the earth, I don’t want to miss out; the sad thing is we can so easily miss out!  If nothing else this Covid19 crisis is a wakeup call to the Church to arise from her slumber and to fulfil her destiny.

Too much of the body of Christ has been in deep slumber, afraid of being different, distracted by busyness and we have compromised.  Father forgive us!  It is time to live out Ephesians 5:14 “Awake you who sleep, arise from the dead, and Christ will give you light.”

I believe something ominous has been developing in Britain for a long time now: as Christian influence wanes, so has godlessness in society been on the increase.  With godlessness comes crime, fear, hate, unbridled sexual promiscuity and darkness.  As Anne Graham Lotz said “we have said NO to God so often that God has responded in not so many words, “OK.  If you don’t want Me, I will let you have your nation as you choose.”  Perhaps it is why we are where we are today as a nation deeply unhappy, fearful, lost and lonely.”

It begs the question have we become used to the darkness or are we prepared to say enough is enough. This will not necessarily make us popular to many but we will be like as Jesus said in Matthew 5:13 “salt” to the majority.  As we know Salt has wonderful properties 1)It’s an antiseptic, 2) It makes one thirsty, 3)It is a preservative, 4) It is a seasoning, making things taste better, 5) It is painful to an open wound.

For too long the church in the west has not done a good job at being salt, now is the time for change and I believe we can only do this as we be a people of His Word and His Presence refusing to go back to our old normal.  My encouragement to you is, let us together create a new normal as God is on the move.  Instead of negative news dominating the air waves lets address the balance with the positive.  If you are fed up with what you are seeing on news reports just now here is an alternative.   Since 1997, millions of people have turned to the Good News Network as an antidote to the barrage of negativity experienced in the mainstream media. Because of its long history, staying power, and public trust, GNN is #1 on Google for good news. You can find it at https://www.goodnewsnetwork.org/category/news/

Let us be ready Vineyard for the amazing awesome things that are yet to come as we look to God and his word in this season of re--creation.
Many Blessings
Jamie & Linda